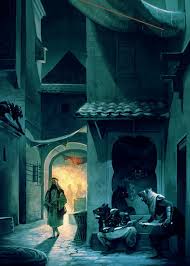 Rich perfume and alabaster tombs…
what wonders lie beneath the desert moon?

The great river Nuria is said to flow from the roots of the World Tree itself. The wisemen of a wandering tribe drank from its waters in the days when the world was new, and learned to harness the potent ley-lines coursing through this land. The River Kingdom built by them there still thrives in the present day, defended from it’s enemies by their ancestral God-Kings, whom they awaken from ancient tombs in time of need.

Pre-dating even the capital city of this River Kingdom, the true jewel of Nuria Natal is Per-Bastet, the fabled City of Nine Lives… and nine pyraminds.

According to one legend the Everlasting City of Cats sprung up around the river village where once-mortal goddess Bastet had taken birth. When she saw the place thriving she longed to live among mortals once more, and made the city her abode.

Many gods came to revel with her. Their tears of joy still glimmer in underground pools and their songs of merriment reverberate in deep caves. It is above these sites that the great pyramids stand.

Per-Bastet has been razed to the ground by invaders eight times, and risen again eight times, leaving the devout or superstitious to wonder… what will happen if it falls once more?

Stories reach to distant lands of alluring harlots with vertical eye-slits, 800 foot statues of golden Gods, and feral gnolls presiding as temple priests. They say the honored dead walk serenely among the living, serving as civil servants, with no blemish of decay and no memory of their former lives. A river of sand said to spill forth from the hourglass of time pours into a chasm within city limits, washing up artifacts from times long past or yet to come.

Come, seeking fortune or delight, to Per-Bastet, the Jewel of Nuria Natal!

I'm sorry, but we no longer support this web browser. Please upgrade your browser or install Chrome or Firefox to enjoy the full functionality of this site.